Off the back of their Meredith Music Festival 2019 lineup announcement, Melbourne wonky soul four-piece Karate Boogaloo have shared the second piece from their upcoming ‘KB’s Mixtape No. 2’.

This time KB gives us their flip on Mtume’s disco/R&B slow-jam “Juicy Fruit”. It’s a mid-tempo bounce, mellow and light to the touch with sprinkles of oozy synth and slide-guitar throughout.

Composed around a Linn LM-1 drum machine and recorded in under two hours, Mtume’s “Juicy Fruit” has had a lasting impact on the R&B and hip-hop scene with over 100 listed sample uses of the track. Most famously used in Notorious B.I.G’s 1994 hit “Juicy”, Keyshia Cole’s “Let It Go”,  Warren G’s “This D.J” & in Grand Theft Auto’s radio shows.

Making up the rhythm section of long-time Melbourne soul favourites The Cactus Channel, KB consistently sit in their own lane – the combination of raw musicianship and sheer time on the clock in the studio and on stage gives them a glowing connection rarely seen. Making records, they follow their own rules; recording and mixing on tape with no plugins and no edits, releasing exclusively in mono. It’s not about anachronism, it’s about the KB manifesto: a chosen set of limitations forcing a specific outcome, an outcome best appreciated through their “KB’s Mixtape” series of LPs. 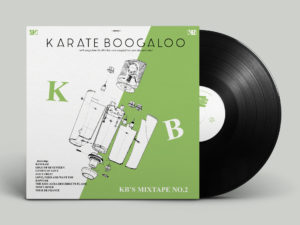