Their debut single “Moon” is dropping next Friday Oct 18, keep your eyes peeled. But for now, they’ve announced a single tour – More info below.
Read their bio for all the juicy info on the band.
Follow them on Facebook & Instagram.

Izy​, pronounced eye-zee, is the world’s first Far North Queensland neo-soul supergroup, and their time has come. How did this improbable band come together? Three sensitive boys, seeking shelter from the cyclones and the heat and the homicidal jellyfish found themselves hanging out, swapping shifts in a music shop, jamming in a blues bar, selling ukeleles and distilling clandestine dragonfruit gin. Three young men who aren’t brothers, but became like brothers. Each from a musical family, each growing up in a different family band. Families from three different continents who all ended up in the distant north of Queensland.

Izy started life as The Montgomery Brothers, a blues act put together by guitarist ​Ryo Montgomery in Johno’s Blues Bar, where Ryo grew up helping his father run the bar and learned his craft at the feet of the guitar greats who passed through on tour. Next to join was drummer ​Maru Nitor-Zamartarro​, who before he finished primary school was playing percussion in his parents’ cumbia band an hour up the road in the rainforest town of Mossman. Last on board was the baby of the group, ​Warrigo Tyrrell Jr from Cloncurry, in the dry country south of the gulf. A wizard of bass guitar with the voice of an angel, brought up on Gospel, Blak protest music and The Shadows. With the trio united, the band was complete and the chemistry was instant.

The Montgomery Brothers did the grind up and down the East coast, touring and living out of one van. They played everywhere, earning fans, friends and mentors as they went. But in the end they needed somewhere to really spread their musical wings. The day Warrigo finished high school they drove the 2,943 odd kilometres to Melbourne and set up camp in Footscray, far from the rainforest and the reef and set to work on a new chapter in their musical journey. With new influences, new partnerships and a new home it was time to shed the old skin and The Montgomery Brothers became Izy, named in honour of Ryo’s Grandmother Irene, a great supporter and mentor of the boys in Cairns. 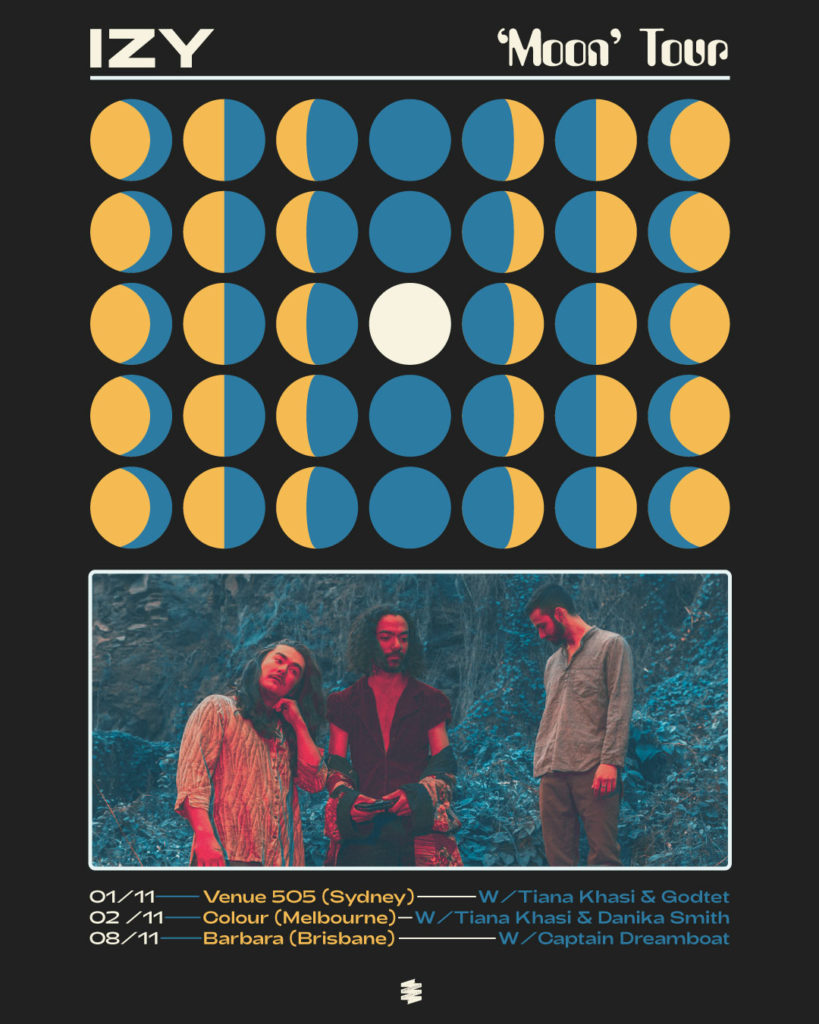